Today is the day!

Posted by UltraFrog at 9:46 PM 0 comments 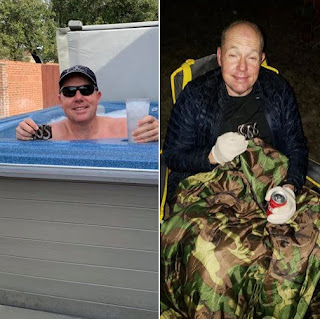 Posted by UltraFrog at 9:15 PM 0 comments

There are always experts...

I finished my race calendar for the year. And except for Salton Sea which isn't confirmed, it looks like this:

One of the things that you'll learning in UltraRunning which is no different than in other parts of life, is that there are always experts. They're right there to tell you what you're doing wrong, what you should do instead, what works for them, what someone said in an article they JUST read yesterday. You know those types.

As evidence above, I like to run a lot of races (some that are "training runs") leading up to a big race. The stress on the body is intentional, but some would say "that's way too much" and "unnecessary" (re: the "experts"). What I've found is that I can run and train really hard as long as I listen to my body and respond accordingly. I take what it's willing to give. There's a huge mental component to long distance running, and the comfort and benefit of knowing that I'm going into a race more than prepared outweighs the risks.

When you're constructing your race schedule, put together something that works for you something you can handle. If you have a huge race like Badwater, put together races leading up that will best prepare you for that eniron. And.. give yourself some flexibility in your schedule that you can back off or drop something if you need to. 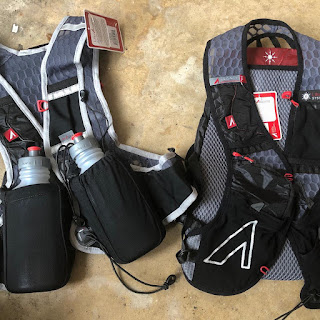 When you run #badwater135 in #deathvalley you've got to train the body to consume a lot of fluids. My "go to" hydration packs are these beauties by #ultraspire. Just got the updated Alpha 3.0 and the new Legacy. Christmas in March! They fit close to the body, don't bounce, and most of all they're easy to get in and out of with large hooks in front. Tons of storage capacity too which is great on the desert trails when water supplies are scarce. What's your favorite pack?
Posted by UltraFrog at 9:16 PM 0 comments

Got invited back to Badwater135 again and couldn't be more excited. Will try and do a better job of keeping up with updates, training, etc. The feel of going back to the race as a veteran having finished it once is completely different than as a rookie. I have a much better idea of logistics, coordination, what to do, and what NOT to do. One of the things RD Chris Kostman repeatedly says for potential entrants into the race is to get out and jump on a crew. Learn the race, learn the Badwater culture, understand the team aspect of this event. Having run both Badwater Salton Sea and Badwater135 I really understand why he mentions this over and over and over. You really are at a competitive disadvantage (not just vs other runners, but against the course itself) if you haven't been out there and experienced the heat, the suffering, the triumph, the camaraderie.

I look forward to sharing my experiences of this amazing event so it will help future runners that one day want to run Badwater, or so that other's can experience the race without having to actually toe the line  : -)
Posted by UltraFrog at 11:05 AM 0 comments

After a few years' break where I've spent a lot of time focused on family and other priorities, it's time to pick back up on logging some running adventures!

Even though last few years have been pretty crazy, I have learned many things which have actually made my running better. First, I had gotten to the point where running was "what I did" rather than "what I loved doing." It feels good to be back to wanting to get out to run, rather than checking it off the "to do" list for the day. Second, I've spent less time cramming in as many races as I can, and more time doing adventure running with friends where you find cool trails, slow down the pace, and enjoy exploring and camaraderie. Third, I've learned to listen to my body more, to train smarter rather than harder, and to mix in other sports to eliminate burn out.

I've also learned I can share quick thoughts rather than long, laborious posts which take too long to write and too long to read. So - that's all for now!

In addition to keeping a race calendar, I'm now keeping a lottery and application calendar. Races are filling so quickly that you either have to be on the internet ready to lock yourself into a race months in advance, or you hope that you hit payday with your 'powerball-esque' odds in getting in via a lottery. Whether you get in or not determines how other races will fall into place.

I probably need a flow chart to keep up with everything. If Western States, then Grand Slam with prep mountain races for training. If Badwater, then Key100 and other heat intense races for acclimation.

Looking forward to Badwater135 invitations to see how the rest of the year is going to pan out. If no Western States and no Badwater135 - I need to create another portion of the flowchart that answers the question - "then what?"
Posted by UltraFrog at 9:31 AM 0 comments