So this week I opened the box and there they were - brand new, shiny, begging to be worn... moon shoes! I mean, Hoka One Ones! About a year ago I read about Hoka One Ones, a polar response to the minimalist running craze that's taken over with Vibrams and barefoot running. I typically don't get caught up in trends of any sort - let alone running shoes since I've been a tried and true Brooks loyalist for many years. Nevertheless, something about the shoe intrigued me. More cushion, less wear and tear on the body, and funky looking to boot? Ok - tell me more. When I was in Utah last year for the Speedgoat 50K I was able to sneak into the Wasatch Running Company and slip a pair on and bounce up and down the sidewalk in awe. Wow - these things felt cool! Unfortunately the popularity of the shoe and the few US vendors that were carrying them resulted in no sizes above an 11 (I'm a size 11.5 in Brooks). Bummer! The store promised they would be getting some larger sizes in - but I hated to drop $180 on shoes that I wasn't sure would fit - and the hassle of mailing them back and forth just didn't make sense. At the time.  :)

Apparently I had a mid-life running crisis because about a month ago because I got the itch to try some new things with my running. This is counterintuitive to my typical behavior because I believe in the "not broken don't fix" rule. I'm not sure I wanted to change anything with my running as much as I wanted to augment my current running. I haven't been running with a watch of any type for over a year - so I thought I might want to pick up the Garmin 310XT. $400 bucks with the heart rate monitor though? Mmmmh. Then I thought I'd buy a running camera so I could document all of the cool races that I'm fortunate to participate in. I found the GoPro Hero which from web postings appears to take phenomenal photos and video. Ok - this is encouraging. The price seemed right - somewhere around $300 for the one I wanted - but I started thinking about having to lug that thing around during races. Is it too bulky? Does it really have the fisheye effect that some of the postings claim which makes the crystal clear picture a bit distorted? Was my trainer Monte accurate when he said if I ran while filming it would be so unsteady that I would be sick when I watched it on the big screen? Mmmmh. Time to revisit those Hoka One Ones!

As a Brooks advocate and sponsored athlete I am not able to wear Hokas during any of my races - but thought buying a pair as a toy and bouncing around would be fun and a fun change. The shoe itself looks a little goofy and bulky - but it's surprisingly light and no heavier than my Brooks ASR 7's. 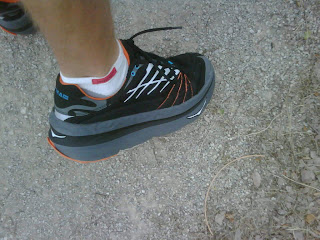 So - I laced them up today and thought I'd try them on the trails. First, I did about six miles on flat gravel up and down the Trinity River. The shoes felt fantastic - it really felt like I was swinging my legs back and forth on an eliptical with no impact - just amazing. I intentionally cruised over rocks and sticks - pretty much anything that I could find just to see if I could feel objects through the shoe - and for the most part anything small you roll over without notice. With the exception of a few places where the shoe rubbed (new shoe syndrome) the performance was flawless and a run ride. Hoka's mantra "Time to Fly" was accurate - I flew.

So - they were good on the flats - what about rocky trails? I took off to Sansom Park to run hill repeats on a fairly steep, rocky trail which I thought would be a great proving ground. Again, rocks and branches that were on the trail were no match for the moon boot. I was able to cruise right over them with no problems at all. Up and down the steep hill - the rocks were also not a problem in terms of being able to feel them through the shoe. What was a problem though was the overall stability of the shoe and not really being able to "feel" the trail. With stability - I felt there were some problems with the lateral movement - and felt my ankles rolling multiple times from side to side - this could be because of the height of the shoe . This is something that someone might get used to if this was their everyday trail shoe. The other problem was not being able to really "feel" the trail - it's fun to roll over rocks and branches and bounce around all over the place - but I felt a little out of control by not being able to really feel the trail at all - and wonder how I would like the shoe on a long, tough mountain trail run?

The hesitations I had with the stability in no way took away from the complete blast that I had trying out this shoe. It's crazy to consider a shoe a toy - but for me this is a toy that I'll take out every now and then and play with up and down the trails for a change of pace. Ultimately I cannot part with my Brooks ASR's - and am already looking forward to the Brooks ASR 8's coming out this summer along with the Brooks ASR with Gore-Tex. Cool! Of course I'll order both (and probably multiple pairs of both) as soon as they are available.  :)  If you're looking for a shoe that will double as a toy - I'd say check out the Hoka One One. At least keep an eye out for it at your local running store even though few places carry them. I remember when Vibrams were hard find....

Here's a shout out to my friends Peter and Laura that endured heat and humidity and ran hill repeats with me today! 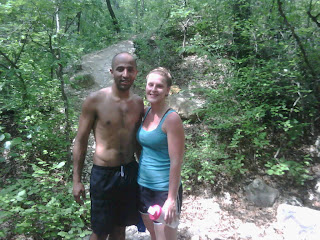