So - I thought I would share my pre-race prep to give you an idea of what the heck I put together when I'm running one of these races. Hopefully I'll have a good race report to write up in the next day or two!

In New Mexico and ready to roll...

So I made it to New Mexico today - left Ft Worth with muggy, warm conditions and landed in Albuquerque in a cool light rain. Made the hour drive up to Santa Fe with snow on the surrounding mountains and a dry chilly wind. The forecast shows sunshine and a high in the upper 60's on race day which should be great. Tonight looking towards the Jemez Mountains it was dark and the radar showed light rain/snow mixture. There was also snow the last few nights up there - but some responses to my facebook post indicate that the conditions should be great and that most if not all of the snow should be gone. Hope so - I'm not sure I've quite prepared for running on steep sections of snowy trail.

The legs feel good and rested - though I went up a flight of stairs and could already feel the lack of oxygen due to the altitude. I have some Tylenol ready for the dull headache which I usually get for a few days when I'm in the mountains.

The game plan for tomorrow is to drive up to Los Alamos via Bandelier Nat'l Monument - check out the Valle Grande (the race goes through part of the course) - and end up at the pasta dinner around 530pm or so. A good night sleep is in the plans - but for some reason it never quite works out that I can fall asleep once I crawl in bed - and then up at 4am Saturday to make it down to the start around 4:45am for the 5am start. Good grief that's early.

Here's a short video I took while landing in ABQ with my new Kodak Playsport video cam!

It's about 10 days til the Jemez 50 mile run - and I couldn't be more excited to head west to New Mexico for a little R&R (and running!). The first 4.5 months of the year have been a blur with a tremendous amount of things going on with family, work, etc. I've logged quite a few miles and had some fairly strong races, but I haven't been as focused as I'd like to be at this point in the season. I see light at the end of the tunnel with things calming down a bit the second half of the year which will be a welcome change to the frantic pace so far in 2011.

I'm starting to think about a race strategy for Jemez and what my game plan in to get through all 50 miles. Last year, as a reminder, I fizzled at the Pipeline Aid Station (around mile 18) and pretty much waved the white flag by dropping down to the 50K and walking it in. Yah, it was incredibly hot in the long exposed sections, and the winds were gusting to 50 mph with blowing dust. The conditions certainly didn't help, but overall I didn't run a smart race which was frustrating. I had hydration issues, I partnered up with someone that was also having issues and didn't run my own race, I was a mess.

This year I'm focused on having a better race. I'm battled tested having experienced a large portion of this course last year, and enduring the Speedgoat 50K out in Utah. There's no amount of training that can substitute for experiencing the course of a race. Last year I know the section where I mentally collapsed - the climb just after Caballo up/down. For some reason I had mentally prepared for a flat, runnable section after the up/down - and when the trail started climbing up, up, up my mental toughness went down, down, down. Now I know what to expect. I'm also physically stronger than I was last year and I've done some hill training in the heat. There's no way to simulate the conditions of long climbs in thin air that you have on long mountain runs when you're in Texas - but I feel I've done the best I can with hill and gym training.

I haven't decided what I'm going to carry during the race - if I'm going to go with a handheld or a hydration pack. I've been training with a handheld - but I'm not sure it's enough with one section between aid stations being around 7 miles. The hydration pack is nice - but I pack so many things in it "just in case" along with the water that after a few hours my shoulders ache. One thing I'm considering is carrying a handheld to the Pipeline Aid Station where I can pick up a second handheld in my drop bag - carry both through the middle section where there is a greater distance between aid stations - and then dropping one off at the Pajarito Aid Station. Another option is to carry one handheld and clip a few smaller bottles on my hydration belt. 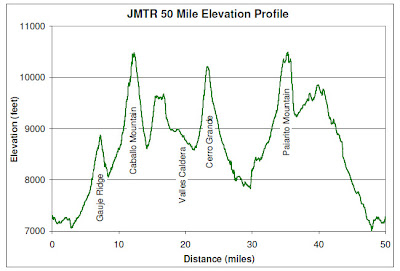