Grasslands 50 was my first attempt at a 50 mile race two years ago. I remember this course - long stretches of sand - lots of open space with an abundance of sun - the typical March winds whipping. I remember stopping at mile 41 and change thinking that I couldn't take another step and getting my first DNF. Over the last two years I've run multiple 50 mile races - and further - but I really needed to come back to Grasslands and conquer the course. I wanted to do this last year - but decided that blowing wind/snow/ice was more than I wanted to handle. This year it was time to take another stab at it.

Even though Decatur is only about 45 miles from Ft Worth - I thought I'd drive up there night before. I'm always scattered on race morning - and eliminating a hour plus drive at 5am seemed a good idea. The hotel was busy - apparently motorbike races - but fortunately the hotel was quiet. Unfortunately though I didn't sleep well. Tossing - turning - never getting comfy. I'm way past being nervous before 50k races - this was just one of those nights where I just didn't sleep well. The last time I looked at the clock it was about 3am. A couple of hours later I was up and getting ready - red eyed and yawning - not a good way to start the day!

Not getting good sleep the night before doesn't help your chances of completing a race - but it certainly doesn't have as big of an effect as you might think. Once you're up, moving around, and the adrenaline is flowing the fact that you should for all intents and purposes being a walking zombie fade into the background. It's race day - you have more important things to worry about than being sleepy.

The drive out to the LBJ Grasslands is only about 15 minutes from Decatur down a dark and windy road. This year when we turned off of the main drag and onto the gravel road we were immediately faced with a cloud of dust from the car ahead of us. We really weren't following that closely - but it was so dry and dusty that it was like driving through a thick fog. I was hoping that there would have been some rain during the week to wet things down - but with no such luck I knew it was going to be a nice dusty run with winds forecasted to pick up. 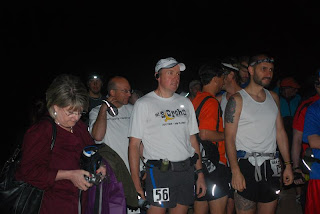 7am rolled around and we were ready to go. The sun wasn't quite up yet but there was enough light to see without a headlamp so I ditched the light - grabbed my handheld water bottle and was off. The first portion of the run is an out and back and quickly gets you acquainted with the sand that you have to endure off and on for most of the race. Since the course is mostly single track the first part of the race is spent in a single file line running everyone elses pace - which for me was probably a tad faster than I needed to go - but it felt good since it was cool and the legs were fresh.

Once I completed the out and back and was at the start/finish again it was time to start the first of four loops - the blue loop. The course is run similar to a clover leaf where you keep coming back to the central start/finish after each loop. The first loop is the longest at 13.5 miles - and then the loops get gradually shorter the further you get into the race (though they seem much longer as the day wears one!). Loop one was fairly non-eventful. There was cloud cover so it wasn't hot yet and the winds hadn't picked up. The sand was there - but the legs were still fresh and it was more of an annoyance than anything else.

The second loop which was the white loop and started off with the familiar long stretches of sand. I was already starting to feel a little tired - never a great thing at mile 20 and not even half way through the race - but I know not to panic because you have some ups and downs when you're running all day. A couple of miles into the loop I hit a nice downhill section with very little sand. I really felt like I was flying on this section and making great time and my spirits were back up. I knew there was a long section without an aid station but I thought with the downhill section and the time I was making that I'd be ok with my one handheld. I must not have been running as quickly as I thought - because I kept running - and running - and running. I finally started walking as there were sections of sand again. Just about when I thought the aid station should be around the corner I saw a mile marker - I was still about a mile away. I was mentally defeated - walking uphill in sand in the sun without water. I just shuffled along until I finally made it to the aid station. Fortunately they had some ice and I was able to get some water in me - the homemade potatoe soup was great - even on a hot day! Refueled and rehydrated my spirits were back up and I started running again.

I really don't remember much about the third loop - except one of the aid stations where a very nice lady started walking towards me with two glasses of water and insisted on spraying suntan lotion on me. I have no idea who she was - but she was the best! It was like having my mother out there watching out for me. Gotta love those aid station volunteers!!

I finally made it to the last loop. This is where I dropped two years ago - emotionally and physically spent. I could very easily have stopped again this time - but there was no way I was going to NOT finish again. At the aid station I sat around for about five minutes talking to my awesome crew that was busy grabbing things - filling and refilling water bottles - etc. I finally decided it was now or never so I got up and took off walking. More sand - uphill - in the sun going into the wind. Really?? Can't I catch a break?? Yes - this was going to be a long nine miles. :)  I was definitely walking the majority of the time - but managed to job some on some flats and downhills. Hit the aid station again with the potatoe soup - had another glass and it was just as great as it was the first time around. Around mile 47 I managed to catch a glimpse of someone in front of me. I'm typically fairly strong in the latter stages of a race - but with as much walking as I had done I was surprised that I had caught up with someone. Well - this was the motivation that I needed to get my legs moving. I took off running - every now and then on a straight away I'd see my victim up ahead - and I'd keep plotting along. Eventually I was able to catch up and pass him - probably around mile 48 at this point - and it sure felt good. He still looked like he was moving fairly well - so I knew I'd have to keep running if I didn't want him to pass me back up. I passed another guy that was having some stomach issues and was sitting on the side of the trail. I offered him a gel which he refused - and he said he was ok - so I kept on going. I ran the entire way back - even through some of the deep sandy sections - to finish in 10:46. 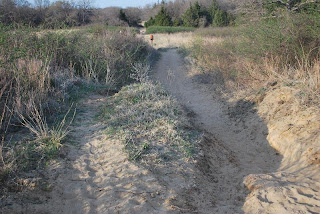 This will probably be the last time that I'll run this race - not because I'm not up for a challenge - but because I just don't find the course enjoyable. I ran it this year since I DNF'd two years ago - and am really glad that I did. When you look at the course profile it looks very flat and fast - and really elevation gain/loss is fairly minimal over the course of 50 miles. The sand though - oh the sand - it just sucks the life out of your legs. I can say with 100% certainty that I would NOT have finished this race without the awesome volunteers that were out there in the sun, sand, and wind all day. They were just spectacular. The overall organization of the race was also superb.

If you haven't run this course - I highly recommend giving it a shot because it definitely is challenging. If you've run it and want to pass at a second go - come on out with me next year and volunteer and we can help some others tackle the sand. Callie (my dog) will help us! 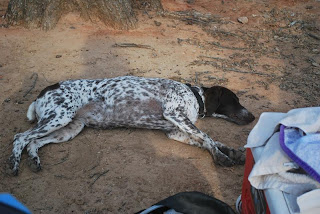